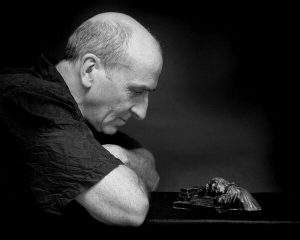 Martin was born and grew up in the beautiful seaside town of Skerries, in North County Dublin, the youngest of seven. He was educated in the local schools there namely St Patrick’s and De La Salle. He left school at the age of fifteen, and worked at a variety of jobs. He took a lot from these experiences and observations. Martin often said he found it difficult to be taught but easy to learn, and it was this aptitude that stood to him in his sculpting. He is self taught, and in all the work Martin has done over the years, he always looked for the creative side in it, from sign writing to window dressing etc.

In 1999 he launched ‘Crutu’, and to accommodate his larger works he moved for a short while to Co Meath and from there on to the rolling landscape of Co Leitrim where he now lives and loves. He has a passion for his sculpting and hopes to sculpt larger subjects in the future.

One of Martin’s favorite subject’s is horses ever since the early 90’s when he sat on a horse for the first time. He just loved the strength and motion of the animal and it was that experience he wanted to capture in his work. Although having a fear of dogs he also loves the character in their expressions and movement, so he also loves using them in his works.